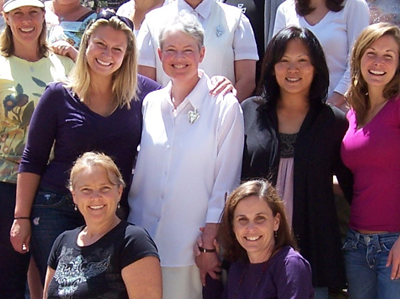 I was born and reared in Reno, Nevada, the only child of John and Mildred Games. Both my parents were native Nevadans. My father owned a chain of grocery stores, Washoe Markets, and my mother was a homemaker. I have happy memories of visiting the stores as a young child and eventually learning to work in every department.

My family practiced no religion at home, but at Christmas we had a small nativity set that was placed under our Christmas tree. When I was about 4 years old, I pulled out the Nativity scene and began speaking to the little statues. I knew the baby’s name was Jesus, but that was all I knew of him. Every year I would have a running conversation with this child in the crib. As I look back, I see that God the Father was slowly introducing me to His Son.

When I was twelve years old, the Sisters of the Society Devoted to the Sacred Heart moved next door to my home. I was uncomfortable with them because I was not familiar with the Catholic religion, let alone Catholic Sisters. My family had a swimming pool and my mother invited the Sisters to use it anytime. Sister Ida Peterfy, their foundress, was one of the Sisters who would enjoy the pool. One day after swimming with Sister Ida, my mother asked me to help Sister Ida carry some food next door to the Sisters. As we walked over to the convent, Sister Ida asked me if I had ever thought about being a Sister. I did not know how to respond then, but now I realize that God the Father was going beyond introducing me to His Son–now He was asking me to say “yes” to Him.

A few years later when I was fifteen, my mother passed away. At that time, I had no knowledge of Heaven or resurrected life. I thought that death was the end of life. During my high school years I was quite active in school organizations and volunteer work. One of these volunteer groups I helped with was the Multiple Sclerosis Foundation. In my senior year, our Sisters asked me to help them as an aide in their religious education classes. In time, I became quite involved and began teaching some of the classes. I even went to Mass daily for two years.

I attended the University of Nevada in Reno. My major in college was Child Development. I enjoyed school and belonged to the Tri Delta Sorority. Yet, as I grew to know God more, I knew I wanted to give my total life to Him. If I wanted to be a Sister, I had to start by becoming Catholic. Sister Judith Fogassy prepared me for Baptism and I was brought into the Church April 8, 1973. I changed my major to pre-school education so that I could enter the convent in September 1974. My father was open to my decision and to my faith–he became a Catholic on the day I became a novice! My father became a daily communicant and died in 1985.

I have been a religious Sister for twenty-seven years. Last year I celebrated my twenty-fifth anniversary of religious profession. The quote on my holy card was, “The Almighty has done great things for me and Holy is His Name”. It was a day not only for myself but for all, to thank Him for His eternal love and faithfulness. In my life, He has always been Emmanuel, “God with us”. He has walked with me ever since I was born, even when I did not know Him. As soon as I knew there was a God, I wanted to give my life totally to Him. My “yes” to Him was forever, even from the beginning.

At this time, I am part of the retreat staff at the Sacred Heart Retreat Camp in Big Bear Lake, California. Previous to this I was on the retreat staff at the Heart of Jesus Retreat Center in Santa Ana, where I met the Knights of Malta. Before I was diagnosed with Multiple Sclerosis, I was Director of Religious Education in St. Finbar Church, Burbank. Past apostolic assignments include: D.R.E. at St. John the Baptist, Costa Mesa, and St. Barbara Church, Santa Ana. I was the Children’s Director of the Sacred Heart Family Camp for sixteen years and Assistant Coordinator of the Sacred Heart Leadership Retreat for eight years.